The TRUTH About Bacon

Here Is How You Properly Add Bacon To Your Diet


When people today think of bacon, they think of clogged arteries, love handles, and sin. They also think of Homer Simpson.

That’s right: eating bacon means that you’re destined for heart disease, a fat belly, and a lifetime in Satan’s dungeon-Doh!

But, thinking this way is a terrible misconception. In truth, bacon is a very good addition to your diet, and should be something enjoyed more often than you endulge in pancakes and syrup or crepes with brown sugar.

Pancakes and syrup may look good to some people, but it is not good for you at all…

Bacon is not an unhealthy food when chosen correctly. By reading this article, you’re going to learn why and how to properly add bacon to your diet, and you’re going to start doing it now.

Bacon is a cured meat (a natural way to prevent the meat from spoiling by way of salt, and often nitrites) that traditionally comes from a pig. It consists of both the meat of the pig, plus the fat (known as lard).

Bacon usually comes from either the belly of the pig, the back, or the sides. The amount of fat (lard) in bacon depends on how fat the pig is, with the belly usually being fattier than the back, especially in America. 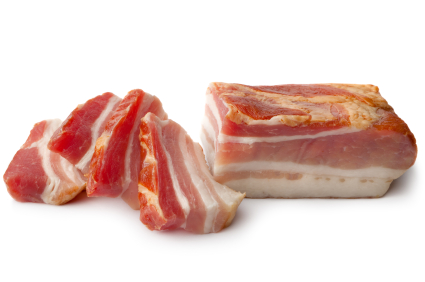 Today, you can also find bacon made from turkey. But if you actually spent time reading the label of turkey bacon, you’d see it contains a laundry list of ingredients, many of which are not good for you such as hydrolyzed corn gluten, soy protein, wheat gluten, disodium inosinate, silicon dioxide and nitrites.

Europeans Have It Right

All over Germany, pork reigns supreme. From bacon to sausage to lard, no parts of the pig are left unused. And, if you take a good look at traditional Germans, you will notice that they are not as overweight as Americans, nor suffer the same incidences of chronic disease.

Unlike modern-day Americans, Europeans use lard for most of their baking and cooking. Previously in the US, we also used to incorporate a lot of lard into our daily diets, but with the notion (from our government) that pig fat is too “saturated” and unhealthy, we shifted to the use of hydrogenated plant oils (aka., vegetable shortening ) which actually made us sicker, fatter, and more diseased.


Why Bacon is Better

To understand why bacon, and the fat its rich in (lard), is a healthy choice for us to use in our diets along with other beneficial fats and proteins, let’s look at the nutritional science of this food.

If we take 1 tablespoon of pure lard, we see that is consists of an even balance of saturated and monounsaturated fatty acids, with some polyunsaturates and cholesterol (all animal fats contain cholesterol), but no trans fats. Specifically, it contains*:

If you compare lard to vegetable shortening, you get**:

What’s most frightening is the trans fats found in this man-made, fake lard substitute – trans fats have now been linked directly to heart disease morbidity and mortality, and there is a strong move to rid our shelves of this dangerous fat as soon as possible.

Saturated Fat is Not Bad

Some people still think saturated fats are evil, and as a result have banned bacon from their homes. However, fatty acid experts today emphasize that saturated fat from natural sources like meats, dairy, and tropical oils (coconut, palm) are not detrimental for our health, but instead much better than the polyunsaturated and hydrogenated substitutes we’ve been recently using.

Sure, maybe it’s confusing to try and tell yourself that saturated fat isn’t bad like we once thought. However, it’s important that you realize that we were fed lies and deception that only made us fatter, sicker, and more unhealthy. We need to change this way of thinking.

The bottom line is that saturated fats, like that found in bacon, CAN and SHOULD fit into a healthy diet – a diet low in sugar, processed carbohydrates, and synthetic chemicals, but high in fresh low-pesticide vegetables, organic meats and fish, and nuts and seeds.

What about the omega-6 fats in bacon? Some people feel that bacon and other foods containing omega-6 polyunsaturated fats should be minimized, and a focus placed on omega-3 fats such as fish, flax, and certain nuts - which is both true and untrue.

It is correct that we should try to keep a fairly close balance between the omega-6 fats (found in most meats and some nuts and seeds) and the omega-3 fats, but we can’t completely eliminate omega-6s in favor of omega-3s.

Not only is it almost impossible, unless you eat completely fat-free meats and avoid all nuts and oils, but your body needs omega-6s because they are ESSENTIAL – meaning necessary for proper metabolic and physiologic function.
It’s more important to maintain a healthy ratio of omega-6 fats found in foods like bacon, with omega-3 fats found in DHA-enriched eggs and omega-3 rich fish.

For example, a great breakfast combination would be a few slices of bacon with omega-3 DHA eggs topped with organic salsa and avocado. Delicious and nutritious!

The Science of Bacon Fat

In 2003, I conducted a research study at the University of Alberta looking at the effects of a high bacon fat diet compared to a high palm oil diet on the cholesterol synthesis and inflammation profiles of ten healthy men.

I cooked all the food for these guys every day, so all they ate was what I gave them. They ate things like:

After 6 weeks on each diet, their blood was analyzed for cholesterol synthesis rates, cholesterol, and triglyceride concentrations, and markers of inflammation.

What was found was that the high lard diet compared to the high palm oil diet produced significantly lower total cholesterol, and total-cholesterol/HDL cholesterol levels, with slightly lower LDL-cholesterol and inflammatory marker levels.

What this means is that fat from lard may be less cholesterolemic and inflammatory than fat from palm oil. This does not mean that palm oil is a bad fat, but instead suggests that lard may be better when consumed often.

Now that you know that the fat in bacon is not bad for you, or harmful for your health, don’t immediately go out and purchase bacon and eat it everyday.

First, you need to look for bacon that is nitrite-free.

Nitrite (sodium nitrite) is a preservative used in bacon to not only prevent spoilage, but also keep bacon a nice red color.

However, nitrite is also a known carcinogen and is related to increased risk and incidences of cancer.

So, if you do decide to choose bacon to help you either stick to a lower carbohydrate diet, or just eat instead of toast and jam, make sure you choose wisely – natural nitrite free bacon is the best.

With bacon, you don’t have to worry about the pig being full of artifical or natural hormones, because these are not allowed to be used on pigs.

Now you know that bacon is a good breakfast food, but it can also be used to enhance the taste of your favorite salads for lunch, or as a side dish at dinner.

No matter what you choose to do with your diet, bacon or not, remember that bacon is not bad for you, and will not ruin your health. Also, when eaten in the context of a low-sugar, unprocessed diet, it will not make your belly look like a pig’s.